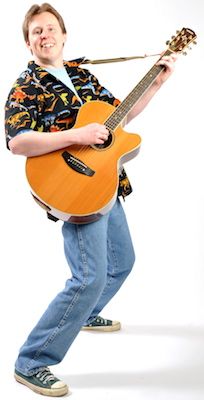 Monty Harper is a songwriter for hire, teacher, entertainer, and recording artist. He performs original award-winning songs for kids and families at schools, libraries, and festivals throughout Oklahoma and the region. He loves inspiring kids to learn and create. His audiences laugh, clap, sing, wiggle, shout, roar, giggle, jump, hoot, pop, snap, and think!

Harper began writing songs for fun around 1989, the same year he entered the Master’s program in mathematics at Oklahoma State University. He found he had a knack for entertaining neighborhood kids, and by the time he completed his degree in 1992, he was fielding a slew of requests for appearances at schools and libraries.

Harper has encouraged kids toward books every summer since, penning, recording, and performing many dozens of songs tailored to the libraries' summer reading themes. “Kids who love reading will benefit their entire lives,” says Harper. “I try to convey my own exuberance for books and libraries through the songs.” Harper’s CDs, Take Me to Your Library, Paws Claws Scales and Tales, Get a Clue, and Let’s Get Creative (recorded with kids’ rock guru Mr. Billy), were each inspired by past summer reading program themes. His reading songs are available online at: www.ReadingSongs.com.

Harper has also become a strong advocate for STEAM education in recent years. From 2007 to 2015, he produced and hosted a series of events called "Born to Do Science" (www.BornToDoScience.com) at the Stillwater Public Library. Each event brought kids face-to-face with real scientists to talk about their current research. The program inspired his most recent CD, Songs From the Science Frontier. Harper has twice been invited to perform at the USA Science and Engineering Festival in Washington, D.C.

As a teaching artist with the Oklahoma Arts Council, Harper regularly encourages kids to develop their creativity through songwriting workshops and residencies. His 4th and 5th grade students have made many community connections by writing and performing songs to help promote curbside recycling, songs for fifth grade graduation, brand new school songs, and even songs to help scientists present their research to the public. All of Harper's collaborations with kids can be heard online at: studentsongs.bandcamp.com/

Harper is a songwriter for hire. He writes and records songs for clients such as children's authors, library systems, businesses, and government agencies. His own songs and recordings have won many honors from groups including Parents’ Choice, iParenting, NAPPA, Children’s Music Web, Kids Radio Mania, Unisong International, and the USA Songwriting Competition. He has released eight titles on CD, available through CDBaby.com, Amazon.com, and iTunes Music Store.

In his spare time Harper is an aspiring author. He resides in Stillwater, Oklahoma, where he and his daughter Evalyn are co-writing a middle grade fantasy novel. More about Harper and his many projects is online at: www.montyharper.com.