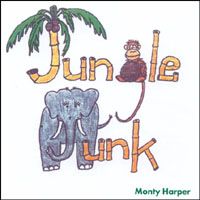 From the recording Jungle Junk!

I was angry at Mom so I rolled her up
and stuffed her in a paper cup.
I washed her down with Gatoraid.
I thought now I've got it made!

But Dad was mad about what I'd done.
He said I was a thankless son.
So I put him through the Cuisinart
and drank him up. Now ain't I smart?

When Sis found out she began to pout
so I chopped her into sauerkraut
and had her on a hotdog bun.
Now I was having loads of fun.

Policeman knocking at the door.
I said, "I ain't got no mom no more."
He said, "Where is she?" I said, "I'll take you there."
So I ate him and his underwear.

Judge said I was found guilty
of swallowing my family.
He banged his gavel; I opened wide.
Now he bangs that gavel inside my hide.

My tummy's feeling pretty tight.
I couldn't take another bite.
In fact I might regurgitate.
Maybe it was something I ate!